Please visit www.gypsyatlas.com to see what I'm up to these days!

- Madeline
Posted by Madeline at 1:42 PM No comments: 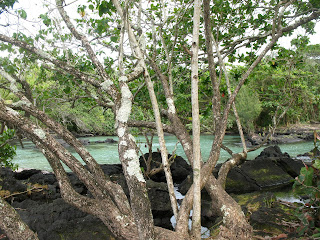 Carlsmith Beach Park in Hilo, Hawaii is known for turtles that hang out in the shallow turquoise water close to shore. Visitors can walk onto the rocks and simply look into the water to see a turtle. These magnificent creatures abound in Hawaii. Interested in swimming with them? Just use a convenient ladder that leads swimmers into the water.
After your swim, be sure to stop at Hilo Homemade Ice Cream Cafe, 1477 Kalanianaole Avenue, for delicious local flavors like lilikoi (passion fruit).
Carlsmith Beach Park is located on Kalanianaole Avenue, near Hilo Airport, a 10 minute drive from downtown. 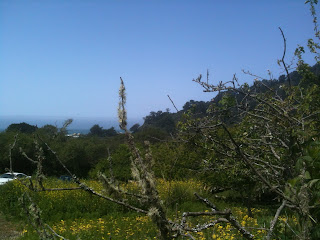 Rancho del Oso's new Nature and History Center held a wildflower show on Saturday and Sunday April 28 and 29, 2 weeks after they opened their doors to the public. Rancho del Oso is part of Big Basin California State Park, located 17 miles north of Santa Cruz (past Davenport) at Wadell Creek. 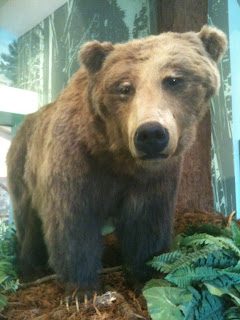 The ranch got its name from the Grizzly Bears that once frequented the valley and who killed Mr. Wadell, Wadell Creek's namesake. They've got a sad-faced stuffed Grizzly in the visitors center. The park is lovely, with wildflowers, marsh, and ocean views. I visited with my 95-year-old grandma. It was especially nice for her since, she knew the woman who had owned the ranch before it was part of the State Park, Hulda Hoover McLean.

The new visitor center is open on Saturdays and Sundays 12-4. The drive up the coast from Santa Cruz is gorgeous, and there's plenty of parking at the park. Bring a picnic to enjoy at their picnic tables with a view.
Posted by Madeline at 11:51 PM No comments: 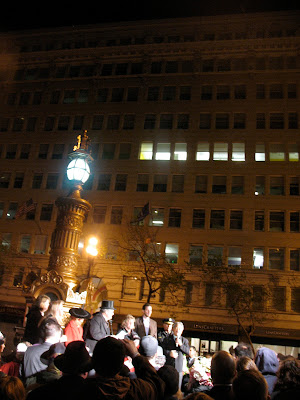 Today is the 106th anniversary of the 1906 San Francisco earthquake and fire. I marked the occasion by waking at 4am to join the survivors parade and gathering at Lotta's Fountain on Kearny and Market streets in downtown San Francisco. It was still dark as night, but that didn't stop a crowd from forming around the shiny copper fountain, the center of old San Francisco.

Mayor Ed Lee was there, along with Supervisor Scott Wiener, but what got me out of bed was the chance to see earthquake survivors. George Quilici, born April 26, 1905, Bill Del Monte, born January 1, 1906, and Winnie Hook, born February 14, 1906, all attended to commemorate the earthquake. Two of the survivors rode in an open-top historic car. They looked fabulous and had to share a blanket to keep warm on the chilly morning. By the end of the festivities, Winnie wore the blanket over her head.

The crowd dispersed shortly after 5:15am, some going about their day, others attending the Lefty O'Douls survivor breakfast, and others, including myself, making their way to Dolores Park to re-paint the Magic Fire Hydrant. The hydrant gets a fresh coat of paint each year on April 18th. This year, the organizers accidentally purchased silver spray paint instead of gold! The crowd mumbled about it, but it didn't dampen anyone's spirits. 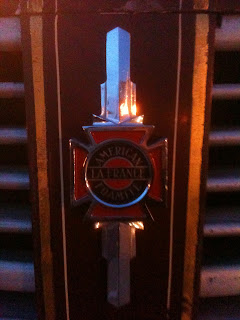 Winnie Hook was the first to spray the hydrant. Next, descendants of survivors got their turn. Finally, anyone with a connection to the earthquake was able to step up, spray the fountain and tell the crowd a story. Each painter received a certificate for their help. As you can see below, the hydrant turned silver today, oops! The fire chief said that she would come back later today to repaint it gold. 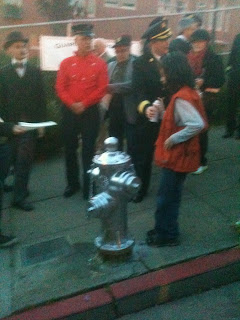 Around this time, the sun was rising over Dolores Park. It was a fabulous way to start the day, honoring the survivors, and the memory of the victims and the heroes from that day 106 years ago. 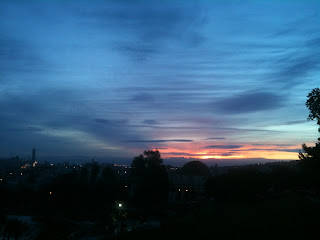 We sang San Francisco at Lotta's Fountain. The tune can also be heard nightly at the Castro Theatre where the organists end their sets with the song right before the films begin.

San Francisco
It only takes a tiny corner of
This great big world to make a place you love
My home upon the hill
I find I love you still
I've been away, but now I'm back to tell you: 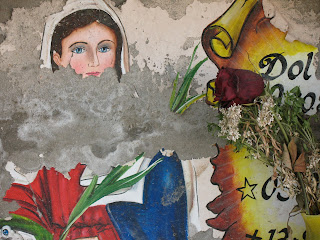 Ferrenafe is not the town you imagined yourself visiting in Peru. Far from the Andes and the Amazon, on the northern desert coast, Ferrenafe is a small provincial town with one tourist draw, the Museo Nacional Sican, where elaborate gold funerary masks, pristine ceramics, impossibly pink Spondylus shells and jewelry of semi-precious stones from the pre-Colombian Sican culture are on display. Archaeologists continue to discover burial sites full of gold at the nearby Batan Grande dig site.

Most visitors view the museum and simply leave Ferrenafe. Spend another hour or two to gain some insight on more modern rural Peruvian funerary practices. Located a ten minute walk from the Sican Museum, the Ferrenafe Cemetery is a free attraction that will leave an impression. 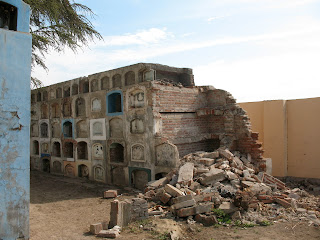 The cemetery is made up of hundreds of outdoor stacked brick sarcophagi, plastered and painted turquoise and white. Each features an alcove dedicated to the departed. The alcoves are precious jewel box art pieces, with original paintings, dolls, decorative gates, and fresh and plastic flowers (mostly in plastic Inca Kola bottles). Older sarcophagi have crumbled into piles of bricks, while some newer alcoves sit waiting to be decorated, with new cement with a name scratched into it.

To reach the cemetery from the Museo Nacional Sican, walk towards the cathedral and plaza on calle Batan Grande. The unmissable white cemetery gate will be on your left. Be sure to bring your camera! 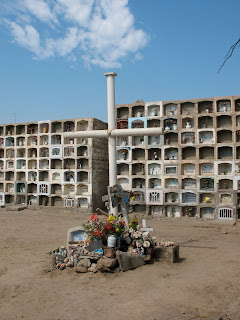 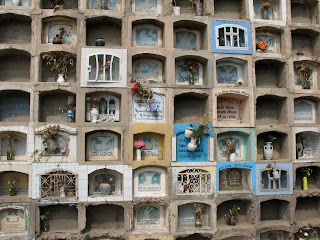 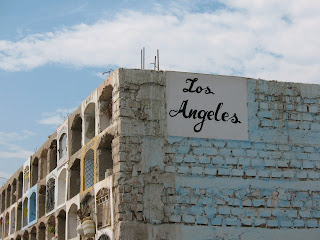 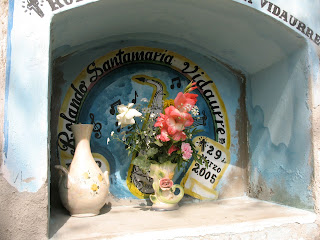 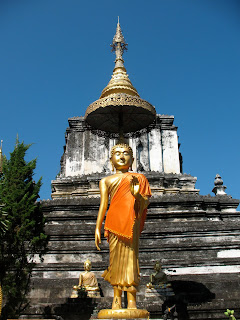 For less than it would cost for a taxi between bars in San Francisco, we rented a private tuk tuk and driver for the morning to visit the temple ruins of Wiang Kum Kam on the outskirts of Chiang Mai, Thailand. The ruins cover an area that is filled, not only with ancient and modern temples, but also family homes. We splurged on a private horse and colorful carriage with driver. Part of the thrill was voyeuristically peering into the patios of private homes from our carriage as we went from temple to temple.

The site is an oasis, where city dwellers can worship while marveling at the beauty of the ancient sculpture whose red and white brick is partially covered with green foliage. One of the most beautiful Buddha sculptures, of black stone draped in a saffron sash, was renovated through the efforts of concerned neighbors. Visitors can stroll in the park-like setting, but the site is not just for gawkers. We encountered a Thai family fishing in a pond that had formed inside a ruin. A shrine with fresh marigolds, cigarettes, bananas, recently burned candles and incense, and miniature sculpture overlooked the family as they fished.

The photo above was taken in a busy area of Wiang Kum Kam, where vendors sell offerings to worshippers and new and ancient sculpture and architecture exist side by side. Hire a tuk tuk and driver through your hotel in the old city. The tour takes less than half a day and is absolutely lovely! 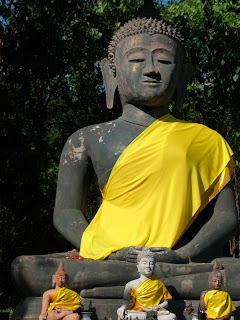 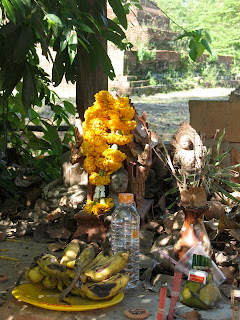 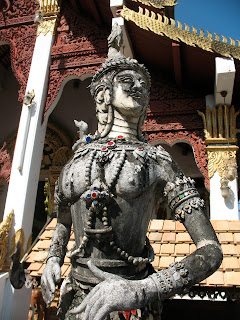 Posted by Madeline at 4:30 PM No comments: 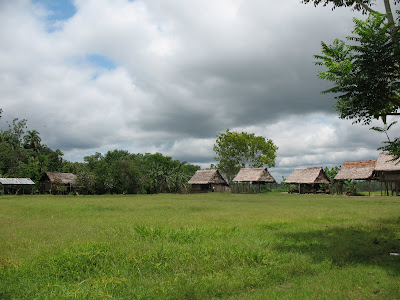 This article in the New York Times discusses the large earthworks discovered under the forests cover of the Amazon in Brazil and Bolivia. The earthworks consist of large shapes (such as circles and squares) connected by roads. Researchers have not found evidence of human settlement in or on the earthworks, leading them to believe they are ceremonial. This means that thousands of people could have been settled enough to build massive ceremonial structures in the Amazon. It also means that large sections of land , which is now forested, were once used for agriculture. 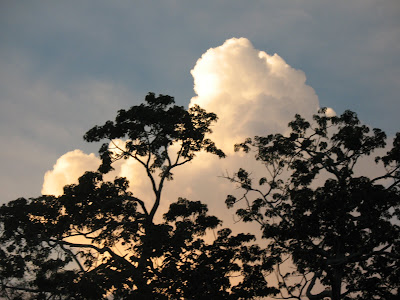 Amazon Clouds and Trees, near Iquitos, Peru
photo by Madeline Horn
The article sparks my curiosity by positing that there may have been towns connected by roads featuring large earthworks where thousands of people lived. This is a revelation. I love it when archaeology presents us with a new way of looking at the past. The earthworks were first discovered in the 1970s, yet scientists did not investigate thoroughly until the 1990s. What other ancient mysteries are out there waiting to be discovered?
Posted by Madeline at 12:14 PM No comments: 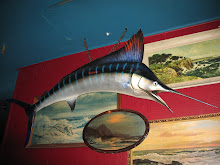